The Las Chispas property is located approximately 180 kilometres northeast of Hermosillo, Sonora, Mexico. The community of Arizpe (estimated population 2,000) is located approximately 12 kilometres to the north of the property. The property consists of 28 concessions totalling 1400.96 hectares. Currently SilverCrest has 16 drill rigs spinning and are testing discovery/ expansion/ infill targets. A Feasibilty Study is currently underway and is planned for summer of 2020. Currently only 10 of 42 known veins have been put towards our latest resource estimate leaving 32 veins to still be significantly drill tested.

The Company cautions that the results of the PEA are preliminary in nature and include inferred mineral resources that are considered too speculative geologically to have economic considerations applied to them to be classified as mineral reserves. There is no certainty that the results of the PEA will be realized. Mineral resources that are not mineral reserves do not have demonstrated economic viability.

(3)  Contained ounces for gold and silver are estimated to include 29% indicated resources and 71% inferred resources.

The resource estimate is focused on an estimated 5.5 kilometres of approximately 20 known kilometres of cumulative vein strike length in the district.

In 1640, rich silver veins where discovered near Arizpe by soldiers under the command of Pedro de Perra. The property did not receive any notable exploration or production until the late 1800s. From 1880 to 1930, several mines on the property had intermittent production. From public information, approximately 100 million ounces of silver and 200,000 ounces of gold were cumulatively produced from the property. Since 1930, no significant work has been completed on the property. 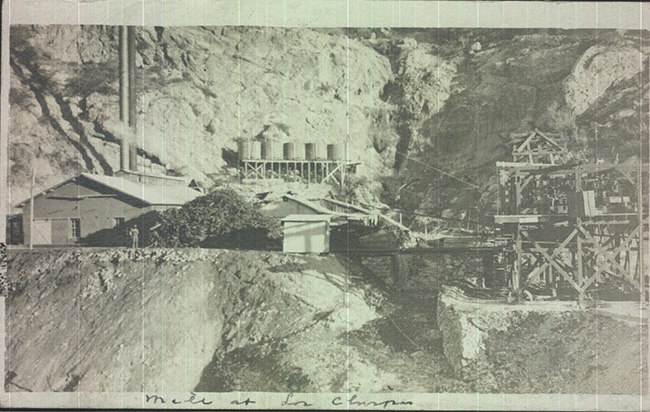 During the early 1980s, a local Mexican company reprocessed old waste and tailings dumps from Las Chispas. Processing was by vat leaching with no production records available.

The Las Chispas Mine is known for its world-class silver mineral specimens including polybasite, stephanite, native silver and pyrargyrite. Specimens are on display in private collections and museums worldwide.

Mineralization occurs in 0.5 to 5 metre wide veins with adjacent stockwork and breccias trending northwest- southeast for 1 to 1.5 kilometres. Depth from surface of known mineralization is estimated at 300 metres. Main veins dip 55 to 85 degrees to the southwest. Fourteen epithermal veins have been previously defined on the property of which 3 have had notable production. The historical producing veins included Las Chispas, William Tell, and Babicanora. From public information, the Las Chispas mill production between 1908 through 1911 was approximately 25,000 tonnes grading 35 gpt gold and 4,500 gpt silver totalling an estimated 25,000 ounces of gold and 3.2 million ounces of silver. Several kilometres of underground workings exist on the property and are partially accessible.

Due to the impact that COVID-19 has had on the Company, the resource estimate is continuing at a slower pace, resulting in a schedule shift into Q4, 2020 for feasibility study completion. With this extension in the feasibility schedule, the Company plans to allocate extra time to;

The Company also anticipates completing its Basic Engineering study as planned by the end of June 2020. The Company is fully financed to begin major construction, which provides for more flexibility in the schedule to secure long lead time items impacted by supply chain disruptions from COVID-19.

N. Eric Fier, CPG, P.Eng., Chief Executive Officer & Director of the Company, is the Qualified Person under National Instrument 43-101, Standards of Disclosure for Mineral Projects, responsible for the preparation of the technical information included in this website and for supervision of field activities related to the Company projects.